Typing games have a special place in my heart. Not only do I love to write in my free time (which is basically typing on a PC) but I also love the intensity of having to type things fast so that you don’t get eaten alive by anything a typing game throws at you. Epistory: Typing Chronicles ties all of the things that I love in games so well, that it would make any reviewer feel as if he or she has to look hard to find something bad in the game just to be able to say something negative too. So let’s get in depth for the creation of Fishing Cactus.

From the very first moments we step into the game, the player gets to experience the stunning environment of Epistory where the entire world is shown through pages that unfold and create the ground that we walk on with our character. We get to control a little girl that is riding a fox with many tales. Not sure if that is a reference to the fable of Kitsune, but all I know is that I love foxes and that particular fox is as pretty as one can get in a video game. A voice narrates things, mostly abstract ones that later will make sense, keeping us company in a game where there are no other words. At least none heard.

The game’s mechanics are simple. We move with WASD or with EFJI, which are by the way the best way to play the game, because those are the buttons that you should be resting your fingers at when you are getting ready to type. They are the beginning positions at least. At any given time, we can stop by pressing SPACE or ENTER in order to enter Typing Mode. We then stand still and are able to type the words that we see around us, be it from an obstacle or a monster that is coming right at us. Sounds simple right?

Well, it can be, unless you are all tryhard about it. Like I was. 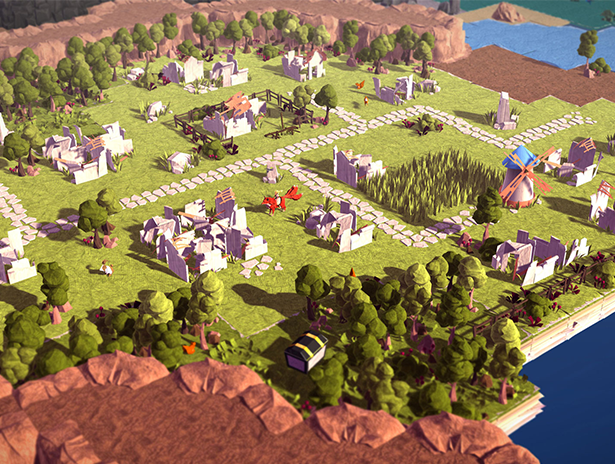 The game offers various difficulties (about 6), ranging from easiest, to insane. There is also the option of going with adaptive difficulty where the game realizes what your typing speed is, your wpm (Words Per Minute), and then sets the difficulty appropriately for your speed. I personally tried insane and then switched to adaptive difficulty, only to realize that there is no difference whatsoever. I guess I maxed it. During the game, you get to cleanse various areas by standing in the middle of a circle and fighting off monsters (by typing the words on them) that are coming towards you. With 8 different areas to explore (apart from the huge main area), the game has plentiful content to explore. Plenty of secrets to find and generally lots of things to do in the main story playthrough.

Enough about typing and lore though, let’s talk about the look of the game before we continue on the typing part. The game uses the low-poly art style which works perfectly for it. It feels as if low-poly is the new “pixel art” of indie games, seeing how many indie devs are using that graphics style to make their games look unique. In Epistory’s case though, the low-poly is more fitting than anything else since everything is more or less made out of paper and folds or unfolds into place, creating what we see around us during the game. I am not going to stress how pretty the fox looks again, but I will say that the worlds, despite being done in the same graphics style, manage to give off a different feeling, creating an atmosphere that makes you feel different. The underground levels had a totally different feel to the one that was in the air for example. Different perspectives, such as the 3D placement of the platforms made it even more fun to explore the area thoroughly.

Next to the visual awesomeness of Epistory, comes the soundtrack, which although may not be something that extraordinary, it manages to capture the solitary atmosphere that our character is experiencing. It is a good companion to have during your play sessions and it manages not to disturb you but gently guide you through each area.

So, story-wise, I have to say that, I unfortunately only realized that there is a lot of depth to the story, after I finished the game. That was mainly because I was too busy tryharding my way through it, to ever even read the things that are written on the floor. Nonetheless, I enjoyed it a lot and the narrator really allowed me to have a pleasant experience while roaming through the lands of Epistory. Definitely one of the game’s finest additions.

Let’s talk about the typing though, shall we?

So, I am a very fast typer, going at about 120 WPM. Unfortunately, although I expected a challenge, the game only managed to kill me on its hardest difficulty when I did not know how to use my powers in certain areas. You see, throughout the game, we gain powers, that allows us to kill monsters of a certain colour (that can only be killed with that power). Those powers, if upgraded (through the points that we collect throughout the game) can do major things that help with fighting off the waves of word-monsters that are hunting for us. Those powers can be, burning later words, icing the monster in place, using wind to push it back, or typing a word and using spark to burn off a word on a nearby monster. Getting used to the powers took me a while but it definitely felt really good once I was used to it.

Now, typing wise, I mentioned my WPM as an example as to how fast you need to be in order to complete the game at its hardest difficulty. Honestly, about 100 WPM would have been just fine, as long as the powers are used extensively. My main concern with the game was not that it felt too easy at most of its parts, but the fact that, since it is a typing game, I expected to learn more out of it. You see, my first experience with a typing game was through Typing Shark, which had a small tutorial of about 15 minutes, that despite how simplistic it was, managed to teach me how to correctly place my hands and learn how to type. I expected something similar from Epistory, which wasn’t there. Apart from the movement buttons (which could even be skipped) the game only provided you with a mechanic of burning words by typing them. Maybe I am just being too picky on this part of the game and expected too much though. It’s not as if the game does not have enough content.

Talking about content, the game even has an Arena mode where you basically get to go endlessly against waves of enemies non-stop. I managed to make 50th place in the world leaderboards on one of my first few tries, and maybe could have gone higher if I wasn’t too tired and hadn’t died from a stupid little critter. Nonetheless, the game has dozens of hours of gameplay if you are into typing games, so nothing wrong with that. What I did find wrong, was that I very much got tired of typing the same words at some point. With such a huge amount of content that will keep you for hours and a huge vocabulary to make use of, I do not understand how I managed to start seeing the same words. Even the big words started being the same one. I may have seen the word “Ultranationalists” more than twice.

The thing is, Fishing Cactus makes both serious games and fun games, so this being one of their fun games, this could just be the reason why they didn’t invest much time on finetuning all the little parts of the typing mechanics. What the studio has made is more than what I would have expected after hours of gaming on other typing games. Either way, the upgrades may have felt more powerful and with a random effect than they should have at times, but still, not too many complaints even on that part, since for a typing game, it did what it meant to do very successfully.

Epistory: Typing Chronicles is available for 14,99 euro on Steam.

By far one of the best typing games I’ve ever played, and trust me, I’ve played quite a few. Epistory combines beautifully-done storytelling through both good visual and aural environments with very good typing mechanics. I may have had a few complaints here and there about the typing, but overall, best case is you might not even notice it while playing the game on lower difficulties. Do yourself a favor and pick up Epistory. Even if you think typing games aren’t your thing, this game might change your mind.

+The typing gameplay is as good as it can get

+Adaptive difficulty is amazing if you are not sure how good you are, gets you straight into the game

–Highest difficulty could be harder