There is a phrase in Greek that you can say to people when they are talking to you about how much hard work they had to do. That phrase is “hey, it’s ok, it’s not like you were digging or anything!” Well, people that obviously use that phrase have never played Deep Rock Galactic, because as the burly dwarves in the game say; “It’s hard work, but I love it!”

Deep Rock Galactic is the creation of the Danish indie game company, Ghost Ship Games. It is a game that is all about digging and enjoying doing so with a couple of your friends. Oh, did I not mention you also get to kill space-alien bugs? Well, yeah, that’s part of it too. A pretty huge part of it actually.

DRG takes us through the depths of unexplored caverns on foreign planets where together with 3 other dwarf partners we are tasked to complete certain objectives that can range from the simple gathering of certain minerals, to the recovery of a lost mule. During those expeditions, we are equipped with flares, guns, various tools such as platform-creating guns and zipline launchers and all we basically need to do is navigate through the mysteries that await in order to complete our tasks.

It is not that simple though. If it was that simple, that game would be dull and I would probably not be writing this long of a review for it. The game offers so much more than one would initially think it can offer through an interactive experience of space cavern digging. 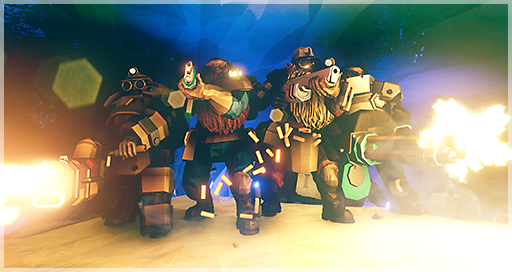 The 4 wonderful classes posing for a group photo

Enter the different classes. There are four different classes to choose from, with Scout, Gunner, Engineer and Driller. Each equipped with unique-to-their-class tools that help out the team in ways that the rest cannot. The Gunner is probably the most obvious and simplistic of them all with his role being that of just… yap, you guessed it; gunning things.

The four man team heading into a cavern can mix and match those or even pick multiples of a certain class if they prefer certain tools in abundance (such as the zipline for example which I personally find simply irreplaceable). If you are playing with less than four, then you can head into an expedition and just be matched with other random people online who happen to be in the mood for digging space caverns.

I have to be honest and say that every time I happened to play alone or with just one more friend, the people we found online were always quite fun to play with. The co-op element helps promote a very healthy and friendly attitude when playing online with strangers in Deep Rock Galactic. 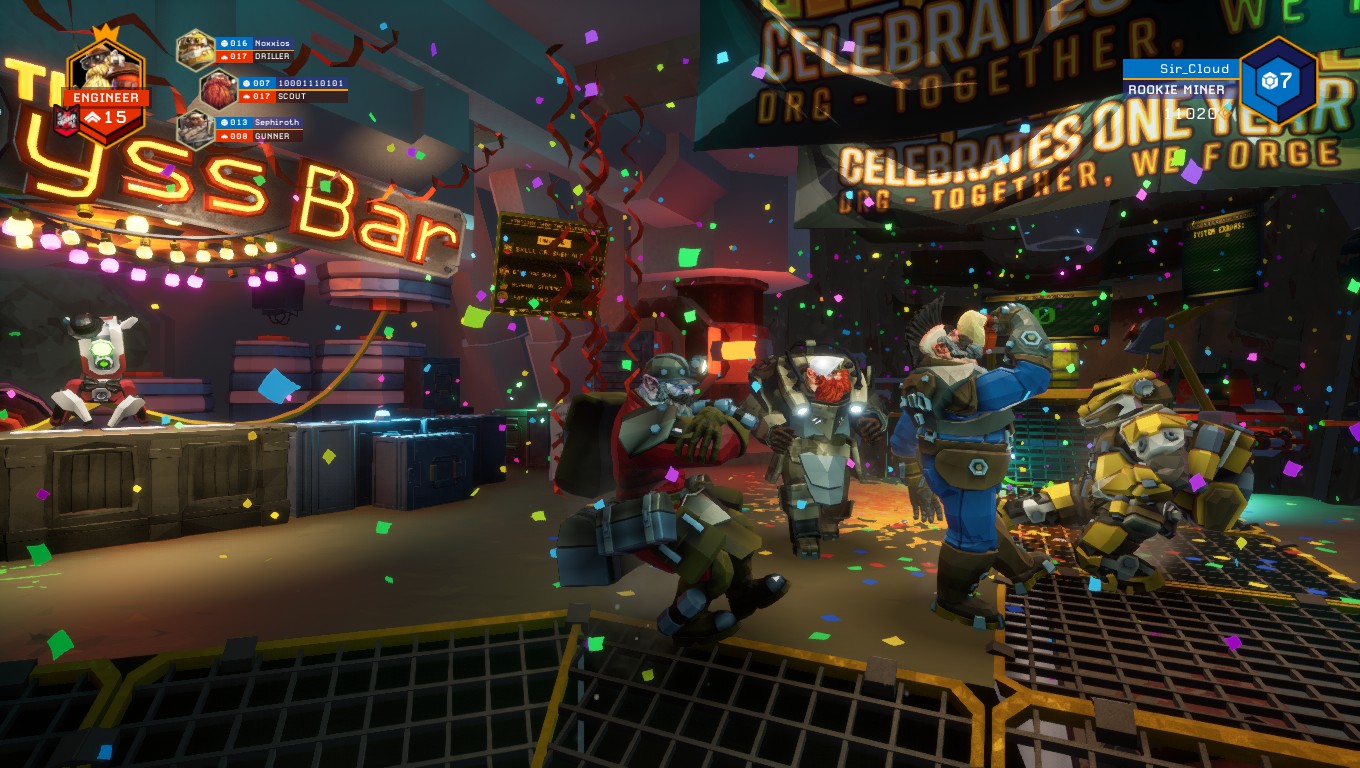 The missions of course vary in both objective requirements as well as difficulty. You can choose to go on a harder mission in order to come back with more experience as well as money and special minerals when you complete it. That is of course, IF, you manage to complete it. The experience helps you level up your class and the money along with the special minerals helps with the process of buying and upgrading various gear that your class has.

I honestly found it extremely fun, trying to navigate various caves and killing bugs while in them with my friends. Little “extra” things in the game actually also make it more fun. Things as the fact that you can order beer and make toasts before you head off to a mission. Or get drunk. Or keep yelling “ROCK AND STONE BROTHERS.” Or “ROCK AND STONE, TO THE BONE!” Yap, that never gets old I tell you.

The battle mechanics are very simple and to the point. Picture any other first person shooter game you have ever played and you pretty much get how the game works in combat. The simplistic nature of it all though is what makes it fun. You just dig, kill bugs, explore, upgrade, rinse and repeat until you get tired (or drunk from having real life beers alongside the virtual ones your dwarf character is drinking in-game). 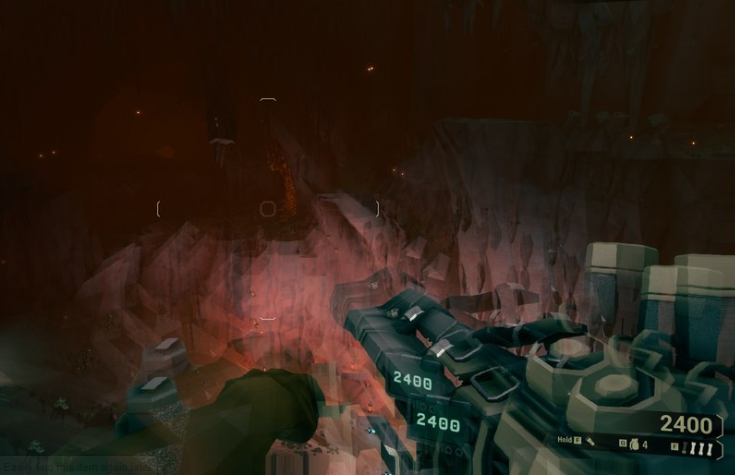 Graphics are pretty much low-poly style and serve the game perfectly since when you are in a fully destructible (or dig-able) environment, things being pretty easy and clear to understand is very important. It took only a few missions before me and my friend were able to understand what kind of mineral was sticking out of a wall due to its unique color and texture.

One extremely important aspect of the game is the people behind the game though. Despite the fact that we here at Hyper Light Up had the chance to meet the developers during Gamescom 2017 when the game was just about to release, any player of the game can very easily say that they are people that care for their game. With a developer’s roadmap so full, it is going to take a while before you get tired of the things that Deep Rock Galactic has to offer. Things such as new difficulties, new gear, new enemies, new missions etc. keep refreshing the game in a very healthy way, inviting older players back to it or allowing the ones that are going at it to enjoy new things as they explore through the content that is already available.

Although simplistic, Deep Rock Galactic offers a very fun experience for you and your friends through very intuitive gameplay with a continuous sense of progression too in order to keep you interested and make you come back to it. Definitely a title that belongs in your library if you like any part of this whole review.

+ Fun and simple gameplay. Dig, kill bugs, upgrade, do it all again.

+ Drinking virtual beers as a dwarf and yelling nonsense about mining.

+ Lots of content and more coming all the time with the developers constantly being in touch with the players.

– Sometimes a bit too repetitive but can be fun again once new content is out.

Claire had heard how much we we’re enjoying Deep Rock Galactic during playtests, so she decided to climb aboard.
Here are the results: