In a post apocalyptic Los Angeles, the only surviving metal band will try to ride through the wasteland with their Gundillac, killing zombies, undead sharks and all manner of evil creatures, with the power of metal. The premise sounds simple but the way Headbang Club, the developers of Double Kick Heroes offer us to complete this quest is definitely interesting.

Double Kick Heroes is a rhythm game in the style of Guitar Hero and, on the mechanics side of things, PaRappa the Rapper. The developers told us at our Gamescom 2017 interview that the idea behind the game came from a Ludum Dare jam, where they had to create a game using only two buttons. As the game begins, we see our heroes trying to escape a horde of zombies. To achieve that and to have a fighting chance in the wasteland, they rig the double kick of the drum set on weapons, so each time the drummer plays the kick drum, the relevant gun shoots a bullet. 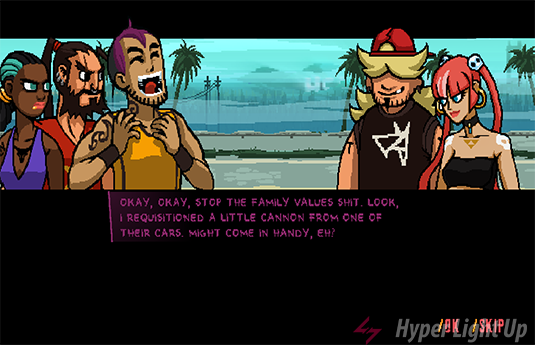 You play the role of the drummer using the left and right arrows that represent the left and right kick drum. The beat shows at the bottom of the screen and you need to press with good timing in order for the weapon to fire and keep away the enemies. If you rack up perfect hits your weapon upgrades, from a simple pea shooter gun to a shotgun and then to a cannon that does more damage.

Depending on the difficulty level, besides the kick drum you can also have the snare and a crash mapped to Ctrl and Shift respectively. Needless to say that the game becomes a challenge and you will need to memorise the song patterns and replay each stage again and again in order to finish it. Besides the keyboard, you can also play with a normal gamepad or an arcade gamepad, depending on what you have and prefer.

Of course you can’t have a double kick rhythm game with only a simple four to the floor beat. For that reason the soundtrack is consisted from pretty awesome metal tracks, all written for the game from elmobo, a video game and metal producer that was an active member of the Amiga demoscene and composed the music for the Playstation 1 game Nightmare Creatures among others. 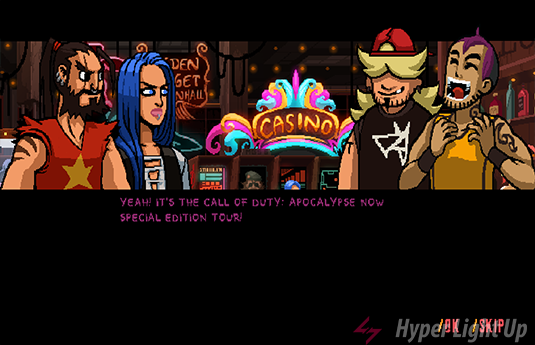 The kick drum is usually not played on the beat of the song, so most of the moments feel like you are playing against your heartbeat, something that is expected for metal music with progressive elements. Usually a person that is not trained in music can follow the most simple and used rhythm that exists, 4/4. Most of the western pop music that we listen every day is written in that rhythm because it follows the beat of the heart and it is easy for a person to tap their feet to it.

The Double Kick Heroes music though is not pop, it is metal, and the developers are proud for that. By playing the game, you might develop a deeper understanding of off beat rhythms which is important for every musician and, even if you aren’t one, it can help with your coordination, with dancing etc. I did not expect something like that from a game and for me this is a huge plus. 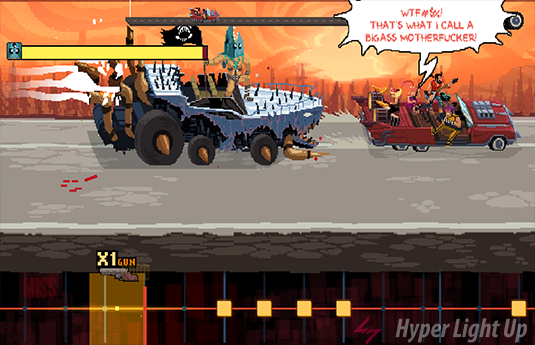 The visual style of the game is also pretty amazing, with a characteristic pixel art style that is inspired by games like Full Throttle and the worlds built by Tarantino and Rodriguez. The artist behind the game, Gyhyom, has worked on music video clips for GUNSHIP and Volkor X. During the actual gameplay the composition of the scene is simple, a background that repeats itself, your Gundillac and a horde of undead and unholy enemies coming at you.

Most of the time during gameplay you won’t have time to observe what’s happening because you’ll be focused on the rhythmical kick drumming. That changes when the story is being advanced between the songs and when the band takes a breather in one of the safe locations. There, it is advised to pay attention to the detail, since there are a lot of easter eggs scattered throughout for you to find.

Another nice addition is the editor, where you can add your own song, paint the beats, choose your stage and enemies and then share on the Steam Workshop. You can also download created levels by other gamers but you will have to own the song in order to play it. 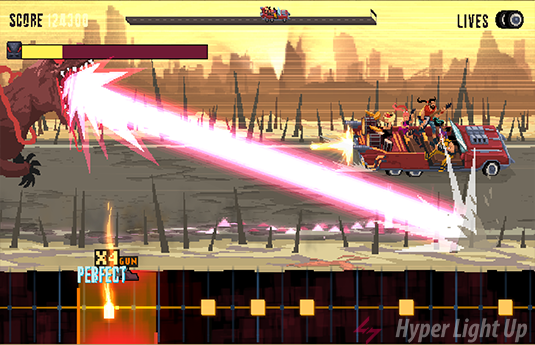 Double Kick Heroes is in Early Access and it includes the Story mode, Arcade and Editor. In Story mode you get one part of the adventure, the American trip which finishes just before our heroes leave for Europe. There are many songs already that you can play in different difficulties and during the Early Access period the developers are aiming to add even more.

At this stage of the development you might experience a few bugs. When I installed the game, it wouldn’t run for me, giving me an error code. I immediately sent a message to the Headbang Club discord channel and after a couple of hours it was fixed. Other than that, I didn’t encounter anything else as far as bugs go.

Double Kick Heroes is already totally enjoyable in its Early Access stage. The story doesn’t end on a cliffhanger, there are many songs to master that will keep you playing for hours and if you are into metal music, you will love the songs. The unexpected result of the main game mechanic that trains you into rhythmical patterns is a huge plus and in general Double Kick Heroes is a great addition to the rhythmic games on Steam. Definitely give it a try.

Double Kick Heroes is availlable on Steam Early Access at 10% off, for the price of 13,49€.