Prizes and “The Store needs to make Money”

Why is it so important that the store makes money? Well, let’s take it from the start.

Sometimes running an event is all about just organizing a meeting on a certain date, at a certain location and having people come over to play your favorite game. This of course, can be amplified through the use of various things such as offering snacks, participation promos and other prizes. Prizes is the keyword here.

There is a variety of ways to get prizes but first I must mention the following point. From my experience, I have learnt that people who love the game and are part of your community will come to just play and not to win prizes. The prizes is just an added sweet part to the whole deal that makes things all the more interesting. You have to also respect people who are just straight up competitive and play to win things, but you are organizing to build a community, not to build a basis where super competitive events will happen later. If that happens, then it is just an added bonus and there are various ways to handle it that we will explain later on.

Your first goal should be to get people together and allow them to enjoy their favorite game in a well organized and well-mannered community environment.

But how do you get prizes? There is a variety of ways to do this:

> Without wanting to explain it too much, I would straight up say that you should be avoiding money prizes at all costs. There is a huge debate around that and I am sure there are 10 times better-written articles than this one that can explain to you why this can be problematic (or helpful in certain communities) so I would say just google and find those instead if you want a real opinion on it. I am just going to say that from my experience, avoiding money prizes in our community was a huge deal and it actually helped maintain its amazingly casual and welcoming feeling it always had.

> Getting unofficial prizes can be tricky. It means that you need to buy them yourself and it also means that you need to find cool things that people could use. There are all sorts of creators around the world who create pretty unofficial things that can be used in the game (in both casual and competitive environments actually) and those come in the form of alternate art cards, custom click trackers, custom tokens and all other sorts of things. Alternate art cards can of course mostly be used in casual play but still remain as one of the most interesting custom items you can add to a prize pool.

In order to finance this endeavour though, you may want to consider the following. How much money are you willing to spend for custom prizes and how much do you think you can make back through tournament fees. 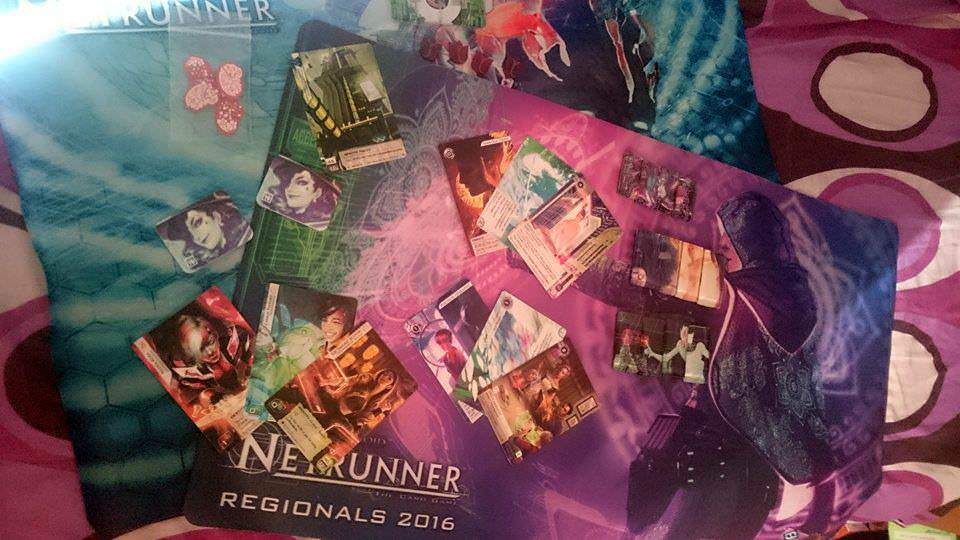 This is where the store comes into the picture. Events can take place anywhere, a cafe, a board game store or somewhere else. Showing support to a board game store and having a certain amount of the event entry fee go to the store can go a long way in building a good healthy relationship between your game’s community and the store itself. That however, comes with another issue. You want to be supporting the store, making back the money you paid for the prizes and also not charging your players too much.

The generally acceptable entry fee for such events is usually 5 to 10 bucks (or euro in our case here). I have found that price to be perfect since it is sort of the kind of price you do not think about paying too much. The entry fee can of course vary depending on how big the event you are running is, how much stuff you are giving out etc. etc. It is really up to you to do the logistics for that sort of thing.

> Getting official prizes is the most common path you could take since most stores will actually be ordering the Game Night Kits anyway. If they are not, it is up to you to tell them to order kits for running them in future events. In this case though, the store is basically putting money in that they are expecting to make back. This is very important to note since if they do not make that money back (and maybe even profit from it) then there is not much reason for them to keep ordering kits for you.

This is where the community needs to start working together with stores to keep the game alive and going. Not only should you do your best to organise and advertise events in the best way possible but you should also do your best to make sure that the store actually keeps having good reasons to keep ordering kits.

We had quite a few stores here in the Netherlands that eventually stopped running events for exactly that reason and for that reason we did all sorts of things. One of those, was actually run other events with unofficial prizes at those stores, allowing the store to also make money on things that they hadn’t invested in directly. Be it a Cube Draft, a community event or something else, it is important to have a “presence” there. Even if you are not spending too much money on entry fees, people being engaged and buying stuff at the store is also a good way to keep the store happy.

This is so important that it deserved a whole section to itself. I have heard of many organizers that have made this mistake in the past and it is quite easy to fall in the trap of doing it. Fantasy Flight Games actually started including that as a guideline in their tournament instructions lately, saying something along the lines of being able to separate the prize pool for various reasons. It is still somewhat an unofficial thing to do, but other than the fact that it is a very good way to have prizes on-hand for various casual events, nobody is really going to tell you “oh hey, you are not allowed to do that.”

Basically, if your attendance numbers are not that amazing (like, 6 people for a GNK) then you should not be using the entire prize kit in that case. As I already explained, people come to play and the prizes are just an added bonus to the whole thing, especially when it comes to casual events. Having the players know that there is are a couple top prizes for the best players of the day is cool, but letting them know that the same will be moved over to another event in the near future is also cool.

Our experience doing this has been amazing actually. When we get a GNK kit for example, we put one of the 2/3 rare promos in the kit as a top prize and then leave the rest for future Cube Drafts or something generally different than normal constructed tournaments. That way, players who do not really deckbuild much or don’t keep up with the competitive scene have a chance of just playing a different kind of tournament and still win it. This way, you are able to reward both casual and skillful players. On top of that, the store is also able to make some extra money on the kit, even if your entry fee is set at something as low as 5 bucks per person.

I am personally the kind of person that not only is an extreme social butterfly, but will probably even annoy you because of how sociable and all over the place I can be. You need to be that person. It is indeed true that it does not work for everyone since there are personalities and characters out there that you need to be more delicate with, but when it comes to organizing things, you need to be able to make people feel involved. Seeing the fine lines and respecting personal spaces is something that you should be able to understand but even then, you might make some mistakes before you learn people’s boundaries.

When a person arrives at an event, you need those people to know that you are the one running things. I do not meant “act bossy” but rather be able to make everyone feel included in a nice and respectful way. 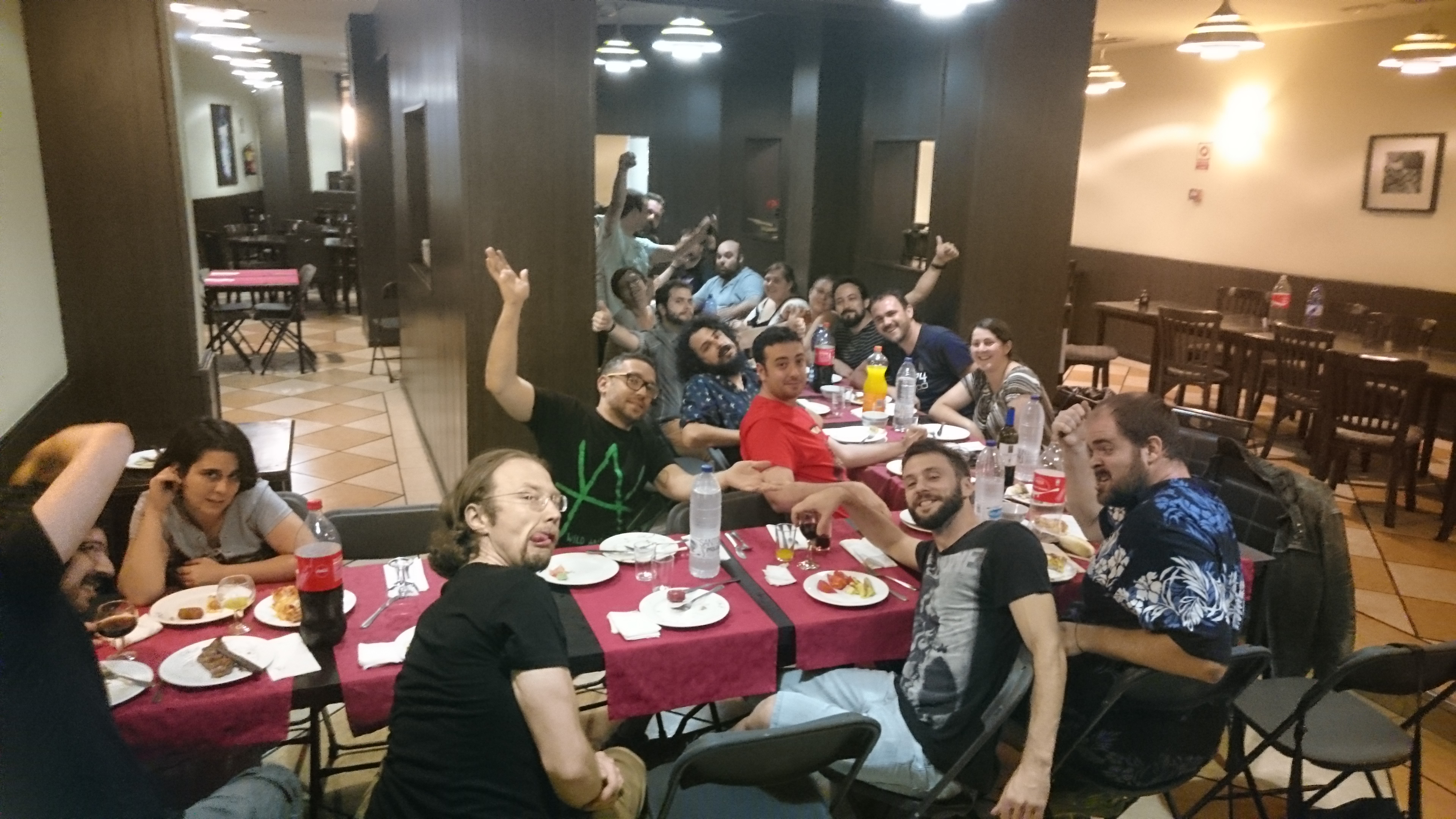 The Spanish Netrunner community is by far one of the best if you wanna look at how much people can bond through a game.

This can get tiring, extremely fast as well, but you need to be able to keep this up, even when events do not have great attendance numbers. I cannot even recall how many times I travelled for an hour by train only to find that our GNK at another city had only four people coming (including myself). Even in those situations though, you need to make sure that everyone has fun and that you get the most out of the day.

On top of that, you need to stay positive at all times. It is very often that you are going to be the kind of person that people will see go to most events, so they will end up asking you all sorts of things about the game. “Is the game at a good state?”, “Isn’t this combo super broken and a very negative experience for the game?” and many other questions like those will come up. No matter what you believe, you should try and stay positive. I am not saying that you should lie to people, saying that everything is just “amazing”, but you should most certainly try and avoid very negative discussions. Keeping a positive image when you are the main person running things, is very crucial for future events.

Next page continues with Make Contacts.