Look, I’m a sucker for anything medieval in games. Medieval fantasy, medieval anything. This is why Bannerman caught my eye at first. Made and published by Armitage Games, it is described as  a gritty, dark and atmospheric medieval action-adventure with challenging skill-based combat inspired by historical swordsmanship. Let’s see if the description stands up to closer scrutiny, shall we?

In Bannerman, we play as a regular man at arms in a medieval army. We are so regular in fact that we don’t even have a name. We’re just a guy, although a bit better than average in combat. This is why, in the eve of a huge battle, we are chosen to carry our lord’s banner. Sadly, we lose both the battle and the banner. When we manage to make our way back to camp, we are forced to go scout ahead in our pursuit of the enemy army and our banner.

The gameplay of Bannerman is quite simple, apart from the combat, which can be tricky. Other than that, it’s a standard 2D game where the goal is to go from the left side to the right side of the map. Thankfully, the developers have added a few interesting conversations in most maps, as well as a couple side paths to explore as we move along. Still, the game’s bread and butter is battle. Just as promised, the fighting is gritty. There are no super-quick sword moves or anything that makes us or anybody else look like a hero. Instead, the fighting is methodical, requiring well-timed parries and hits to prevail. There’s a heavy layer of strategy over it, something that I quite liked. 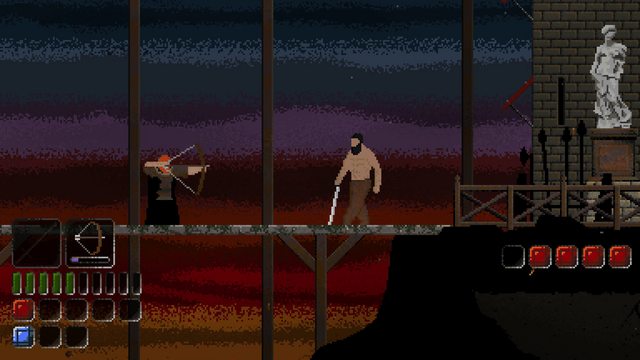 Another big plus of the game is its story. Just like in all other fields, the game does not feature a heroic storyline. Instead, through our journey we bear witness to how war is on ordinary folk and how medieval men lived. The entire thing is presented through conversations with villagers, soldiers and lords. We get everybody’s point of view in the conflict, which allows us to see it in a wider scope. All in all, even if you are not a history or medieval buff, the story is compelling and presented in a very enticing way. As such, it is sure to grab your attention.

The only area of the game where things truly do get epic is its soundtrack. Bannerman uses a variety of string instruments – guitars, banjos and other folk instruments – to provide an exquisite soundtrack. The game’s music manages to be both calm when wandering and epic when in combat with seemingly no struggle in the transition. On top of that, the game’s art and choice of colours is also great. Bannerman uses mostly dark colours to paint the world’s destruction and war in general, which is quite fitting. 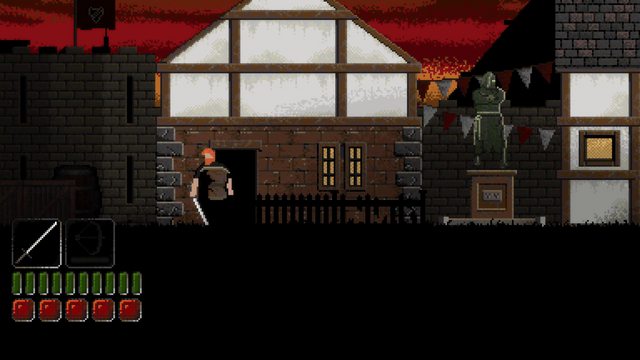 The only thing that I did not like in Bannerman is the bosses, and I think this is where a lot of people are going to be divided. In a game where the focus is meant, at least to me, to be sword fighting, the bosses are built to counter swords. I understand having archers in regular combat. It makes sense and adds some extra difficulty. However, I expect my bosses to be sword fighters so I can have some epic showdowns where I have a chance to test what I have learned. Instead, I get people hiding behind shields, an archer and a wizard. And by the way, there is zero mention of this being a fantasy world other than the wizard. I think it’s understandable to say that the game would be much elevated if the bosses challenged my sword fighting skill and not my dodging.

Apart from this, however, Bannerman is a very enjoyable game. Combat is gratifying and slow in a fun way. The music and the look of the game are both fantastic. Even better, the story is not only good but also told through some pretty creative means. This all makes a bundle that, while a bit spoiled by bosses, is still very appealing. Even if you are not sure about getting the game, I would definitely recommend adding it to your wish list.

You can get Bannerman on Steam for 15 euro.

While Bannerman’s combat is certainly not as intriguing or fair as it ought to have been, the game is still worth looking into thanks to its story and the little details it uses to build it. It also features a great soundtrack.

+ The sound and visuals.

–  The combat is sometimes not as it should be.